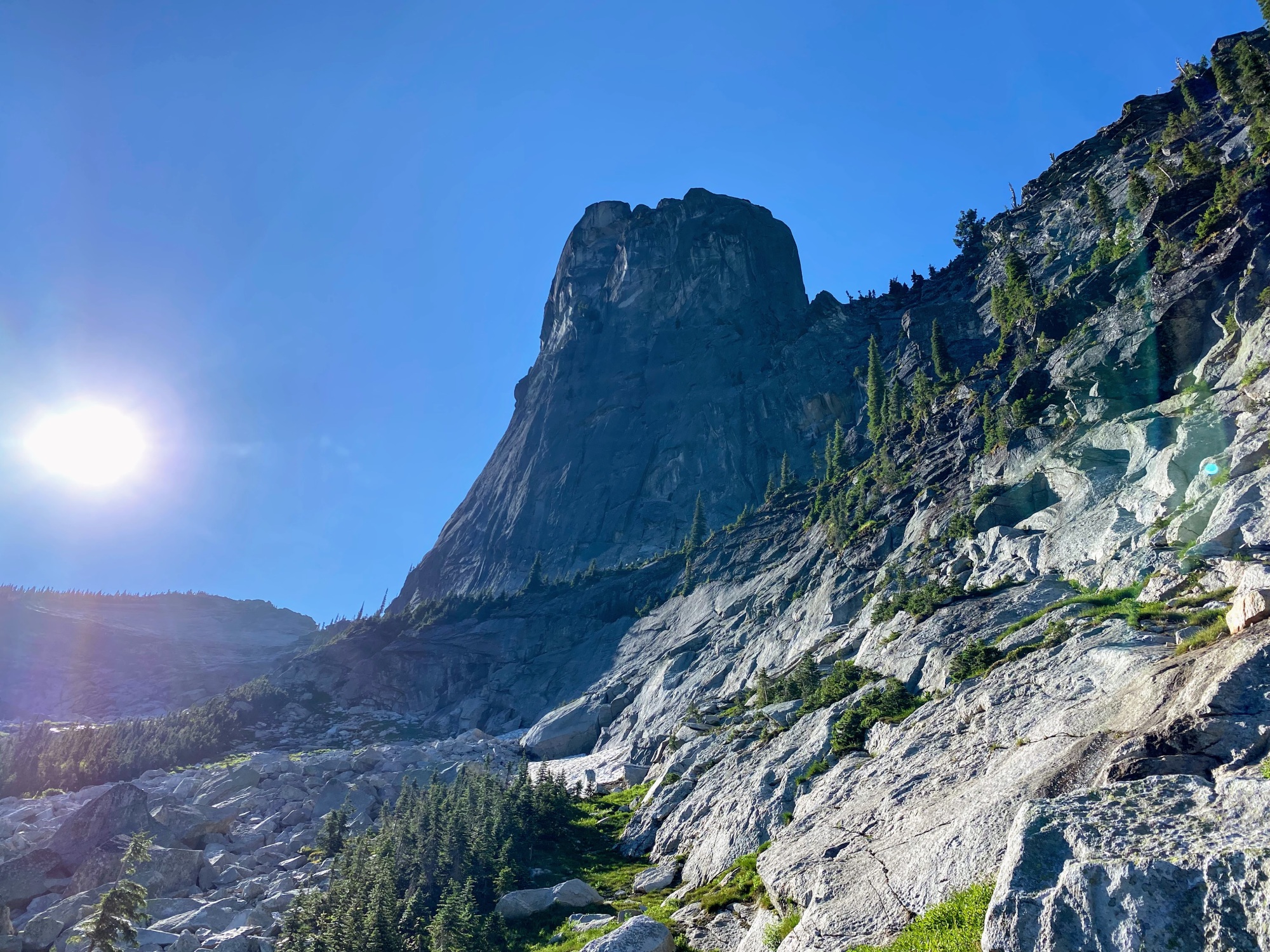 Cory Rekasie and I summitted Lion’s Head via the East Buttress on July 17th, 2021. Lately, I’ve been really psyched on exploring the climbing in North Idaho. Every time I head into the Selkirks, I am blown away by the quantity and quality of the rock. Adventure is alive in these hills. It doesn’t hurt that I can do these climbs in a long daytrip from Spokane. I previously attempted this line several years ago, but we were unfortunately rained out at the base of the SE Face. This was Cory’s first technical mountain climb – very classy.

After a very early morning departure from Spokane, we drove up the rough forest road that leads to Abandon Creek. We were in a high clearance 4×4 and things were straightforward – in a smaller vehicle, you would need to be really careful in a few spots to avoid damage. Finally, we reached a nondescript switchback in the road with a strange, blank sign. I knew this was the spot from my prior attempt, and soon we were blasting the hike/bushwhack into our objective. The trail is currently easy to follow between tracks on the ground and intermittent pieces of flagging. After reaching the talus field, we scrambled up to the shoulder on the West side of the peak and faced the worst bushwhacking of the day. I pushed my body through the thick foliage with branches tearing at my clothes. Soon we were boulder hopping and arrived at the base of the South face. From here, we wrapped around the mountain to reach the Southeast Face.

Our objective for the day was a linkup of the Southeast Face to the East Buttress. This involves climbing 2-3 pitches on the SE Face and then linking into the East Buttress for an additional 2-3 pitches. After caching our gear at our best guess for the bottom of the rappel route, we racked up and located the first pitch of the SE face. It’s easy to find – a gleaming, steep granite slab, covered in green lichen. The climbing wasn’t hard per se; but it was a classic friction slab with next to no holds. With no protection available, I found myself looking at the crux moves of the slab only a few feet below a crack where I was confident I could place protection. 50 feet separated me from the ground. After inspecting the moves for a few minutes, I couldn’t justify the risk of a ground fall given the insecure climbing. I carefully downclimbed the slab, which was tense for a minute or two. Next, we moved over to the base of the traditional East Buttress.

Once we got started on the East Buttress, things started going smoothly. I led the first pitch, which was wildly fun. Protection is good and the moves are secure but steep – awesome! Soon I was belaying Cory up to a comfortable ledge. From the ledge, I lead the second pitch which I took all the way to the summit. Traditionally people will break this into two pitches, but I was pretty conservative with my gear placements and even extended a couple of cams with double length slings, so rope drag was not an issue.

Once on the summit, we relaxed, taking time to eat snacks and read the incredible summit register. The note from the first ascent in 1938 is still in there! There are also notes from John Roskelley talking about the IV 5.7 A3 Direct North Face that I mentioned in a caption above – incredible! There’s a lot of history in this little metal box and it was fun to see how many people I personally know with their names among its pages. The summit is a little oasis in the sky – very cool. Spending the night up here would be amazing. Once we finished reading the register, we decided it was time to go home. Two rappels landed us at the base of the SE face and our cached gear.

Expect 3 hours to the base of the East Buttress.

For the East Buttress, I recommend bringing along cams .3-3 with doubles .5-1 along with a set of nuts.