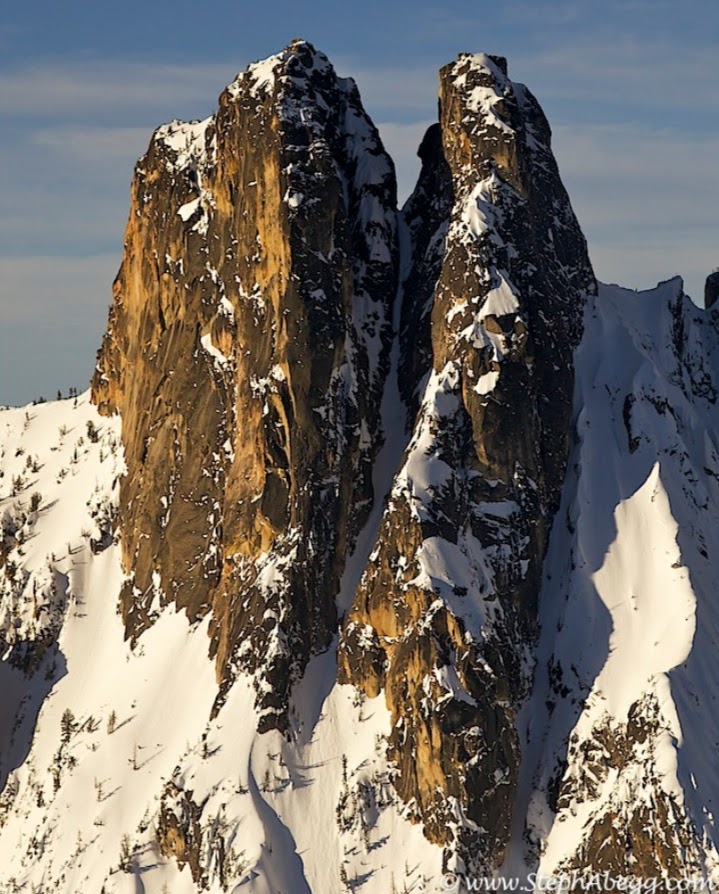 Just a few days after the annual opening of Highway 20, Dane and I climbed Early Winter Couloir to the summit of North Early Winters Spire on April 20th, 2019.

Dane and I met at the famous Hairpin on Highway 20 in the early morning.  We had only met once before and had never climbed together.  I usually don’t climb big routes with people I don’t know well, but Dane has solid references from mutual friends and is obviously stoked.  Soon, we were slogging up 1500 feet of steep snow, sometimes sinking waist-deep.  Snow conditions improved as we got close to the mouth of the couloir.

Arriving at the start of the couloir proper, I scrambled up an easy ice/mixed step to reach a tree anchor.  After Dane joined me at this stance, we roped up and I lead the first pitch.  Awesome moves on thin ice smeared across the wall of the couloir led to an incredible three-foot wide runnel of alpine ice that ended all too quickly.  After this, we simulcimbed several hundred feet of 45-60° snow to the base of the second chockstone, which looked much more intimidating than the first.  A thin vein of poor-quality ice poured down the right side of the chockstone, creating a slightly overhung to vertical stretch of climbing.  Dane built an anchor with small gear in the wall of the couloir and put me on belay.

Once I was under the chockstone, I evaluated protection for the upcoming hard climbing.  Unable to place rock gear, I dug out behind a snow mushroom and placed a picket in the hard snow.  Analyzing the vertical climbing just above me, I climbed up and down the first couple of moves several times to place two good nuts.  With good gear in, I committed.  I delicately placed my frontpoints on blobs of ice on the right-hand wall, trying to distribute my weight to avoid breaking the fragile ice loose.  Hooking with my ice tools allowed me to move my feet higher, instantly causing the ice that I had just been standing on to break free and fall down below.  After a blur of delicate moves on thin hooks, I was swinging into firm neve just over the lip.  With elation, I hauled myself up onto more mellow terrain.

Dane cruised up a moderate mixed pitch with great gear, placing a belay just under the famous cornice.  This cornice is probably the reason that so few do this route – it’s a major question mark.  Many parties have had to painstakingly aid climb past the cornice, a scary and time-consuming endeavor.  Amazingly, there was a breach between the left wall of the couloir and the cornice itself, just wide enough that I thought I could force myself through.  Several steep mixed moves with the picks of my tools torqued in small cracks allowed me to begin chimneying between the rock wall and the cornice.  Finally, I forced myself over the top and found myself at the col between North and South Early Winters Spires.

After belaying Dane up, I prepared myself for the final long pitch that would bring us to the summit of North Early Winters Spire.  I had climbed this exact pitch in 2017, except that it was during the summer when I was wearing a tee shirt and rock shoes.  Looking down at my crampons and up at the slabby rock guarding the summit, I started my lead.

Awesome mixed climbing (M3) brought me to the point where the icy rock became mostly dry. I reached a decent stance and removed my crampons, hoping that the next slabby section would be easier without them.  Careful moves over the insecure slabs in stiff mountain boots required every bit of climbing skill that I have.  As I pulled onto the summit of North Early Winters Spire after the hair-raising 90 minute lead, I realized a three year dream of climbing this route. Gazing upon the North Cascades while reflecting on the journey granted me a serenity that I haven’t felt in some time.

The descent down the West Couloir was pretty painless as far as alpine descents go, with 4 rappels and some downclimbing – my prior knowledge of this descent was helpful.  Dane and I had a painful postholing experience traversing under South Early Winter Spire’s SW Rib and heading down Spire gully, delivering us back at the hairpin curve and our cars, 12 hours after we had left.

Start early to maximize your time on firm snow, but not too early because sleep is important.  Be prepared to aid climb the cornice pitch, but hopefully you’ll be able to bypass it with moderate mixed or AI3 ice. The descent follows the standard summer descent on bolted anchors until you reach the chockstone in the West Couloir.  There is a piton and nut anchor in the skier’s right hand wall that gets you down past the chockstone with a single rope.