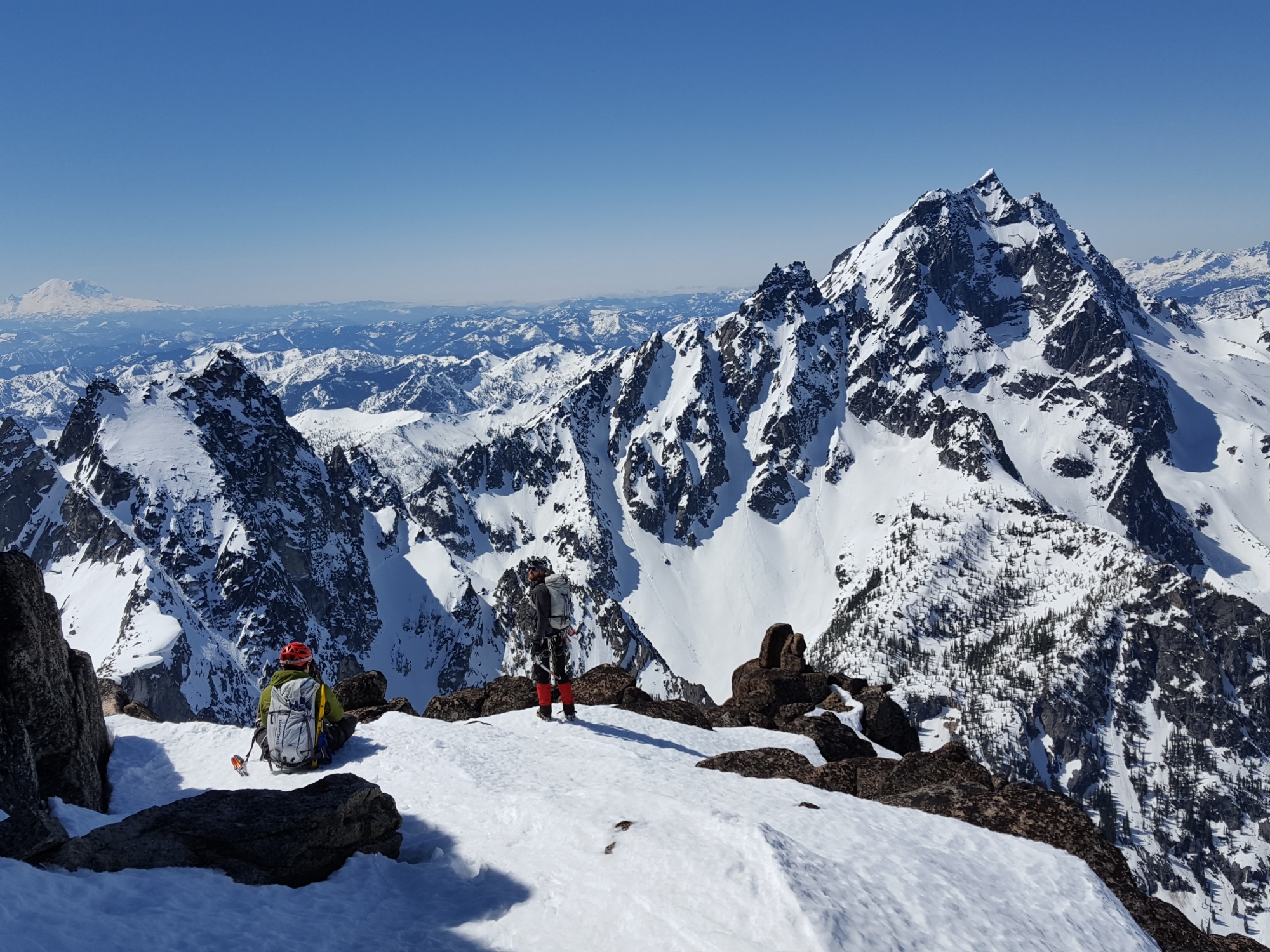 Colchuck Peak climbed via the North Buttress Couloir on April 10, 2016 with Sean and Jill.  Descent was via the Colchuck Glacier.

Could there be a better way to celebrate my 23rd birthday than an ascent of a classic Cascades alpine climb? This route was first climbed by the legendary Jim Wickwire and Ray Lilleby in July 1962, and has become a popular moderate snow route.  The climbing is not really that engaging, mostly just steep snow, but the couloir just begs to be climbed.  I first laid eyes on Colchuck Peak when Justin and I climbed Triple Couloirs roughly a year prior.  Despite being dwarfed by the massive Dragontail Peak, Colchuck Peak is a beautiful and complex mountain in its own right.

While making plans for the climb, I failed to remember the hellish early spring approach from the previous year; the best alpinists have short memories.  Before the forest service opens the gate to the Mt Stuart trailhead, the approach is a miserable, steep, 1o mile affair.

Our first day began with an early start from Spokane and making the long slog in to Colchuck Lake.  We reached the snow line about halfway up Eight Mile Road.  Jill had elected to bring her skis in hopes of descending Colchuck Glacier with them, so she began some rough skinning on the snow while Sean and I continued trudging upward.  The sky was perfectly clear when we reached Colchuck Lake around 7pm.  We quickly made camp, ate dinner, sorted gear and went to bed with an agreement to leave camp by 3am.

Alarms went off, the stove was lit, and before long we were making the otherworldly walk across the frozen Colchuck Lake.  It was very dark out, and the only way to navigate was to match up our knowledge of the mountain’s profile with the massive shadows cast against the brilliant starscape above.  The sun hits the North Buttress Couloir very early, and temperatures were a bit warmer than would be ideal.  We hoped to be at the top of the couloir as early as possible to limit our exposure to the rock and ice that would begin raining down the couloir once the sun’s rays hit it.  A small chunk of ice hit me in the throat as we finished the final 200 feet of the couloir – I guess we weren’t quite fast enough.

After a short break at the top of the couloir, we transitioned onto the freezing cold Northwest Face.  We slowed down here, as routefinding was much more complex than anticipated.  Eventually, we made our way over a spooky mixed step into the sun’s warmth.  I lead out onto what we thought was the summit pinnacle.  Sean and Jill quickly became concerned once I disappeared around a corner – they watched snow and rocks fall down from where I was apparently climbing.  They heard my voice shouting “watch me!” and “this is terrifying!” as I made my way up a steep buttress of loose, snow covered blocks.  Perhaps I was being melodramatic, but the gear was truly abysmal and there were several committing mixed moves before I finished the pitch and found a solid anchor.  The most memorable section was a tall mantle, executed with one ice tool hooked over an unseen edge, one tool planted in hard snow, and my crampons scratching for purchase. Jill and Sean quickly followed my lead before Sean took us up one more short rock pitch to the top of the pinnacle.  We quickly realized the true summit was several feet higher, separated from us by a large gap in the ridge.  We rappelled and motored up some more steep snow until we found a good line to the summit: dry rock which Sean led without crampons at about 5.5. This pitch was my favorite part of the day – a pitch of fun climbing, solid rock, good protection and in an incredible position that lead directly to the summit! I decided that our pathetic “variation” would be referred to as Three Stooges Indirect (AI2 M2+ 5.5 R/X), but I don’t think we’ll be winning the Piolet d’Or for our efforts.

Jill and Sean on the descent. Photo: Nick Sweeney

The descent started miserably – the warm day caused terrible snow conditions that actually forced us to crawl on hands and knees in order to make progress.  We quickly said hello to another party who had just climbed Gerber-Sink (IV WI3+ M4) on Dragontail Peak – apparently in great conditions.  Soon we were breaking down camp and beginning the horrendous hike out.  The final 4 miles of hiking is probably the most miserable I have ever been of my own accord – each step felt like blunt force trauma to my feet.  We took a break with roughly 2 miles to go, and all three of us nearly fell asleep.  When we finally got up to finish our slog, I was ready to be done.  I took off down the road and got way ahead of Jill and Sean.  My body was screaming, feet went numb and the delirium set in – but I wanted to get to the car NOW! Finally, we got down and hit the road home – undoubtedly the most dangerous part of the weekend.  By the time I reached my apartment, I had been awake for 25 hours.  A few hours of sleep did little to rejuvenate me before I headed to the office for the most brutal Monday of my life!

Our rack: two pickets, two ice screws, cams .5-2, small piton rack, a pink tricam, and a set of nuts.  There was absolutely nowhere to place the ice screws and it would have to be unique conditions for that to change.  The couloir was in great shape and I regretted using a rope on it.  Pickets, medium-large nuts and cams were the most used gear of the day by far – leave the rest at home.