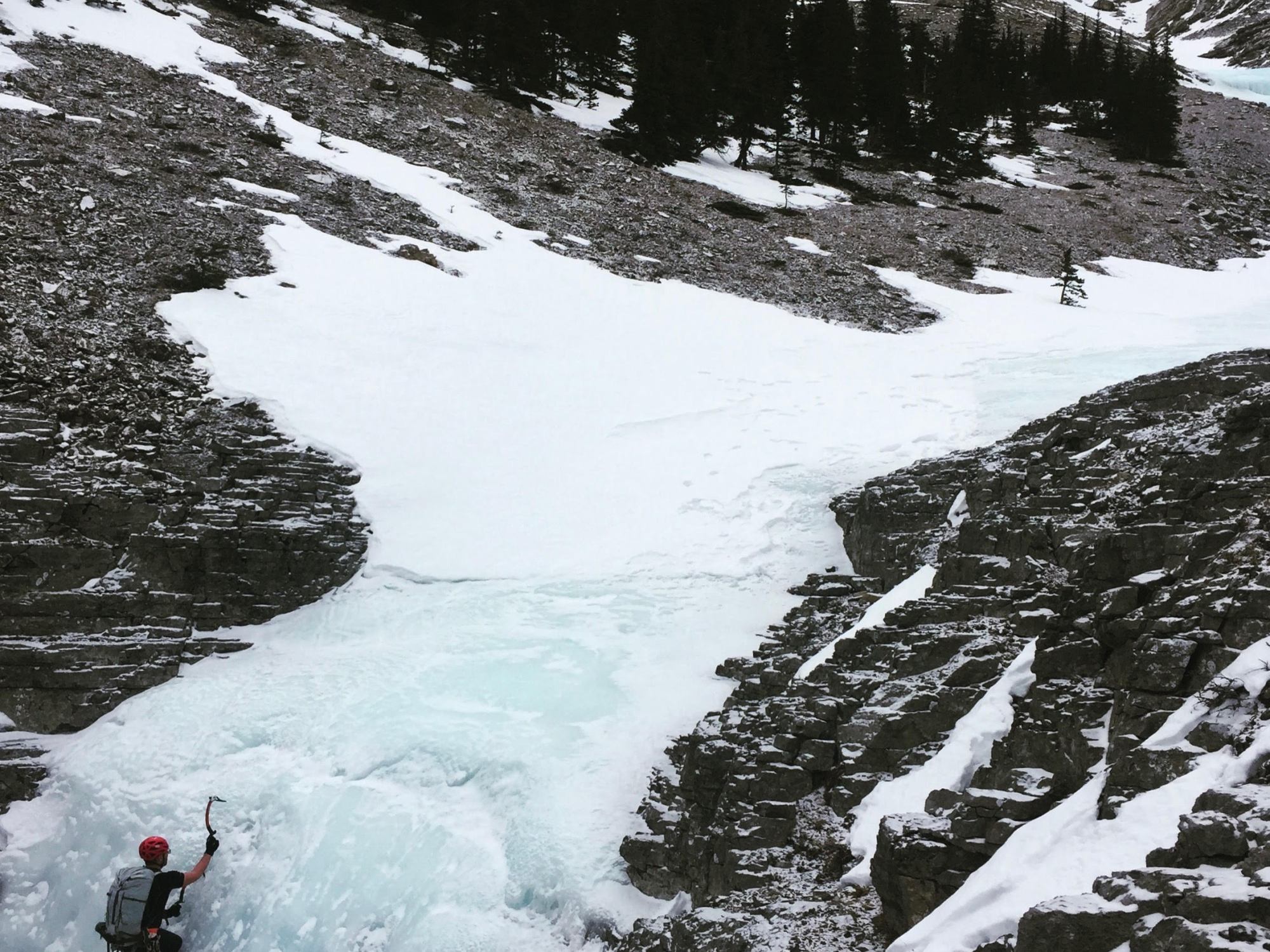 Justin, Jill and I had a fun three days around Canmore, AB.  Living up to the stereotype of Canadian politeness and generosity, our new friend Chris gave us a lift into the Ghost River Wilderness in his tricked-out Jeep.  Suffice to say – the Ghost is AWESOME!

The first day of our trip was spent at Grotto Falls – we expected much more of a climb given that the climb is rated WI3, two pitches.  In reality, the route is a single pitch of WI2 – good practice but not much of a challenge.  We bailed back to Canmore, where we met up with old friends who were running an ice climbing trip for Eastern Washington University’s outdoor program.  They graciously allowed us to run some laps on the top ropes they set up at the Junkyard – thanks guys!

The next day, we rode into the Ghost with Chris and Andrew.  Immediately upon meeting them, we felt like old friends. We were happy that they seemed so relaxed and happy to show us the area. They were considering making an attempt on Burning in Water, Drowning in Flame(M7 WI6) – more than a little above my pay grade.

I was suspicious of Andrew’s statement that the Ghost is “lazy climbing” – my impression of the Ghost was that it is some of the most gnarly water ice and mixed climbing around! Soon, Chris dropped us off at the base of the drainage below our intended route, This House of Sky.  Justin, Jill and I started the approach and were stoked to be at the base of the route in about 10 minutes, a much shorter approach than either Grotto Falls or Junkyards! I decided to leave one of our half ropes at the base of the route, taking one 70m half rope along in case we needed to belay, and to facilitate the rappels.  This was a great choice – we ended up soloing the entire climb up to the “bowl.”

This climb is an ideal solo outing – actually more like an extended session of ice bouldering because each “step” ranged from 15-30 feet with a nice pile of snow at the base.  We topped out at the bowl in just over an hour, a speed that we were very happy with.  I was feeling a bit tired after hauling our rope and ice screws all the way up!

Once we reached the bowl, we considered continuing to the ridge line on the more difficult pitches.  Justin made a solid attempt at a stout pitch of WI4 but the ice was extremely brittle so we bailed.  After rappelling to the valley bottom, we hiked over to The Good, The Bad and The Ugly to meet up with Chris and Andrew.  We broke out the beers that we brought along to thank our “guides” and got some laps on top rope.  Before long, several other “Ghost-mobiles” joined us at the base and we had an excellent backcountry ice climber party, complete with campfire.  Not a bad first day in the Ghost! Tip: if you give beer to a guide, they will offer advice on your technique in the form of expletive-laden shouts from their spot next to the campfire.

The next day, we all felt a bit tired so we headed to Haffner creek to run laps on steep ice and relax.  Another fun trip in Canada!

Gear Notes: Beer for the locals.  Bring a skinny 60m rope for rappels on This House of Sky.