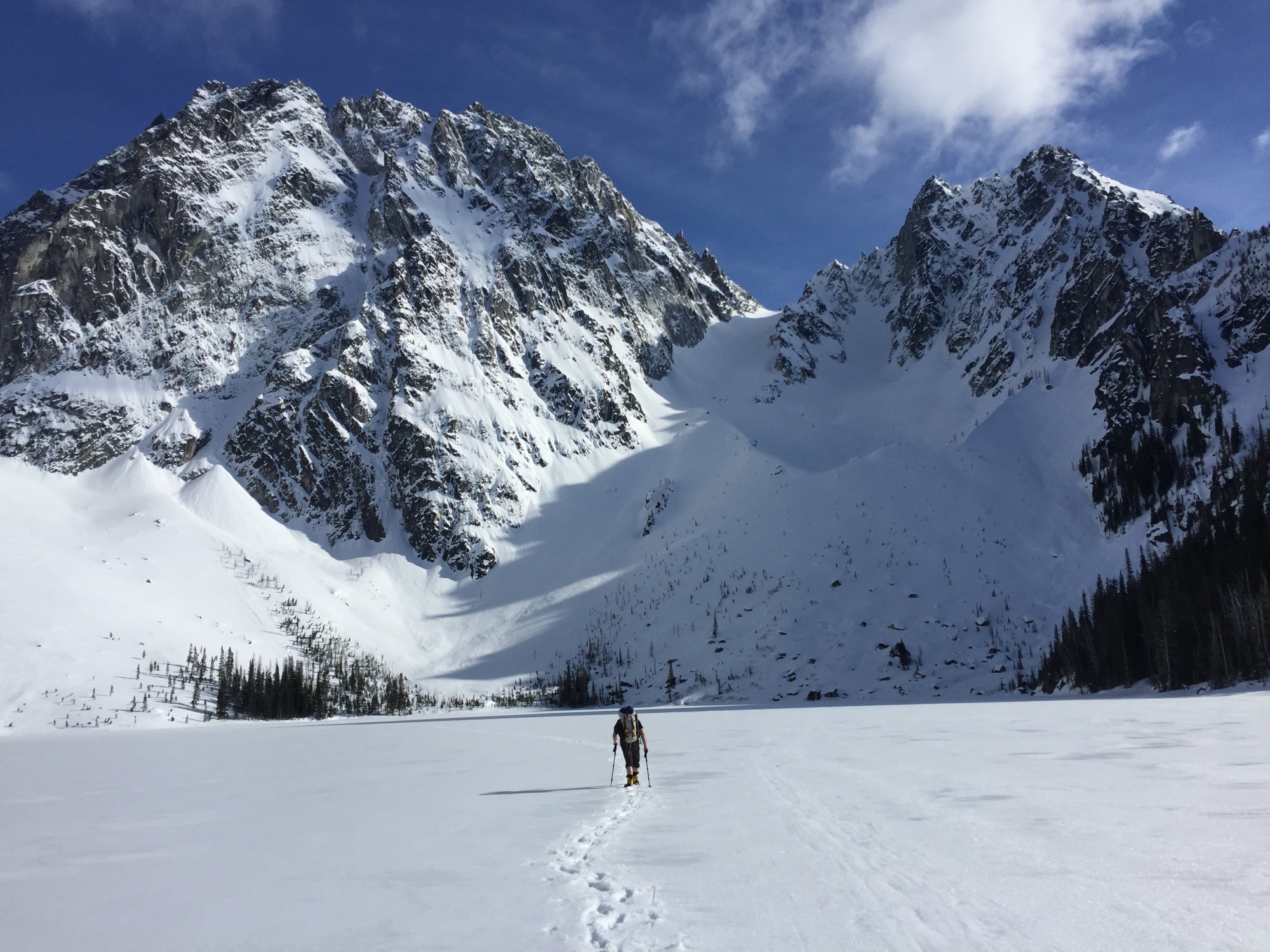 Bryson’s SUV pulled to the side of Icicle Road outside Leavenworth.  The correct pullout was easy for us to find – we’d been here only a few weeks prior, at the end of March.  On that trip, we made the 8 mile hike to Colchuck Lake, camped for a day in almost constant snow storms, and returned home empty handed.  This time, we were hopeful to find better climbing conditions. We shouldered our packs and began the slow trudge up the steep and mostly dry road to the Mt. Stuart trailhead, where we donned our mountaineering boots and finished the last 4 miles of occasionally rough terrain to Colchuck Lake. This is not the fun part! We saw cougar on the road, which we took as a good sign… despite traditional beliefs about large black cats crossing your path.

Six hours later, we reached Colchuck Lake.  No matter how many times I find myself there, the view never ceases to stop me in my tracks. Dragontail Peak’s mighty Northeast Face rises 3000 feet above the lake like an impenetrable wall.  Starting our hike across the frozen lake, Dragontail started to look more menacing than normal, appearing to float high above me.  Suddenly, my internal sense of calm was starting to suffocate.  We had come with the intent of climbing the difficult Gerber-Sink route on Dragontail.  Continuously steep, the route demands sustained technical ice and rock climbing directly up the tallest part of Dragontail’s Northern aspect.  I had climbed Triple Couloirs with Justin in 2015, but Gerber-Sink would be a significant step up for me.  I pushed these thoughts aside once we reached camp.

Bryson and I built a great camp on the Southern shore of Colchuck Lake, which had the benefit of providing us with a short approach in the morning.  We made some dinner while we watched snow, ice and rock slide down the Gerber-Sink.  The route catches a couple of hours of sun late in the day, which loosens the ice and snow holding the face together.  We took mental notes and climbed into our sleeping bags for the night.

The alarm went off in the morning – but we stayed in our bags for a few minutes.  Bryson started asking what I thought about conditions – I could sense some unease in his voice.  Gerber-Sink looked climbable but I knew it was far from prime conditions.  I suggested that we go for Triple Couloirs.  After a brief discussion, I knocked down a liter of cold water and 3 energy bars for breakfast.  Silently, we donned harnesses and put on crampons.  It was go time.

My mind was quiet on the approach – I felt confident.  I knew that the route was well within my technical abilites, I had a strong partner, and the snow was firm.  Most of all, a brilliant landscape of stars twinkled above us.  Aside from being beautiful to look at, a clear view of the stars also indicates clear skies before it is light enough to see clouds. We joked about how starting so early in the morning is a great strategy because you can’t see what you’re about to climb yourself in to.  Finally, we arrived at the mouth of the hidden couloir.

I started up a ribbon of steep snow.  The snow quickly steepened but it was solid – I felt no need for a belay, but I was occasionally having to kick two or three times to get a solid platform in the snow to stand up on.  We quickly gained 300 feet into the hidden couloir proper.  I stopped at a tongue of blue ice and sank a 17cm ice screw, followed by a 13cm screw to complete the anchor.  Bomber! Bryson arrived at my stance, and we broke out the ropes.  We did 3 pitches up the hidden couloir, protected by good ice screws and rock gear.  Soon, we were overtaken by two other teams, both of whom were soloing the easy snow in the middle of the couloir while we climbed ice along the left flank.  D’oh! Bryson quickly got the message, we started simulclimbing, allowing us to continuously move quickly on the easy snow.

Soon I saw the runnels.  They were climbable, but the boot pack from the climbers ahead of us was too tempting, so I talked myself into going up higher to where the other teams were doing a variation.  Soon I saw a left trending snow ramp – I recalled Fred Beckey’s description of the route, which mentioned this ramp as a variation of two pitches to a rappel or “5.8 downclimb.”  After some discussion with the other parties, I followed the snow ramp up, placing a piton and a tricam to protect the severely steep snow climbing.  At the top, I found a good fixed anchor that consisted of two small nuts and a piton equalized with new-ish looking cord.  Bryson and I used this anchor to do a 20m rappel into the runnels.

From a picket anchor at the bottom of the rappel, I led a long simul block over a step of AI3 and almost to the end of the second couloir.  I felt awful.  With the routefinding confusion, rappel, and simulcimbing, I had not eaten or drank water since our first belay, hours earlier in the day. My hands felt like wood inside my frozen gloves.  I veered off to the right side of the couloir and hammered in two bad pitons – all I had were angle pitons, but I needed knifeblades.  I stomped out a snow seat and belayed Bryson to my stance, when he admitted to being similarly wasted.  We took a solid break here, drinking and eating to recharge for the final stretch.  A friendly couple of Canucks joined us near this stance, and we ended up climbing alongside them to the top of the route – great guys!

With both of us feeling much better, Bryson took us to the top of the second couloir, through the crux pitch of fun AI3 ice climbing, and onto the top of the rib at the base of the third couloir.  I took us up another simul block to the top of the third couloir as light snow began wafting down from the clouds that had surrounded us.  Bryson took the final pitch to the summit – he’d earned it.  On the summit, we spent a few minutes taking in the view, before I shifted my gaze to our tent, which I could see in the trees 3,000 feet below.  Time to get out of here!

We descended from the summit via Aasgard Pass, arriving at the tent in 90 minutes.  A quick dinner was followed by a night of sitting out high winds in the tent.  Another awesome day of Spring climbing at Colchuck Lake was in the bag!

This climb was extremely valuable for me.  The first time I climbed this route, Justin led the charge to the summit.  Physically and mentally, it was the hardest thing I’d ever done.  This time, the route felt easy for me – the training I’ve done over the last year made the physical part of the route much easier, and the experience I’ve gained eased the mental aspects.  Is there anything better than moving confidently over moderate alpine terrain?

This was my fourth trip to Colchuck Lake in early Spring conditions.  I strongly prefer to do these trips over 3 days.  The hike in, climb, and hike out are significant enough to be their own day if you’re carrying a lot of climbing gear up the approach with the gate closed.  The road to Mt Stuart trailhead was 100% snow for our trip on the weekend of March 24th, 2017.  This time around, on April 28th, the road was dry for the first 3 miles before it became snow. We hiked the dry part of the road in light footwear before stashing our shoes in the trees and switching to our mountain boots.  It was really nice not to have to hike the dirt road in our big boots.

We brought a lot of gear with Gerber-Sink on our minds – way too much for Triple Couloirs! In current conditions, I would suggest: Cams .3-.75, Small-medium nuts, pins (2 knifeblades and 1-2 angles), 2-4 pickets, and 4 ice screws (10cm and 13cm).  Pickets were the most used pro of the day by everyone who climbed TC – the ability to quickly place them without having to traverse to the rock was great.  However, I don’t trust pickets in anything but the firmest snow, and I definitely would not have trusted any that were placed that day.  Due to my trust issues with pickets, they seem like a lot of weight for not much security.